Click the "Listen" button to launch our pop-out radio player or click the play control below.
Alternatively go to our How To Listen page. 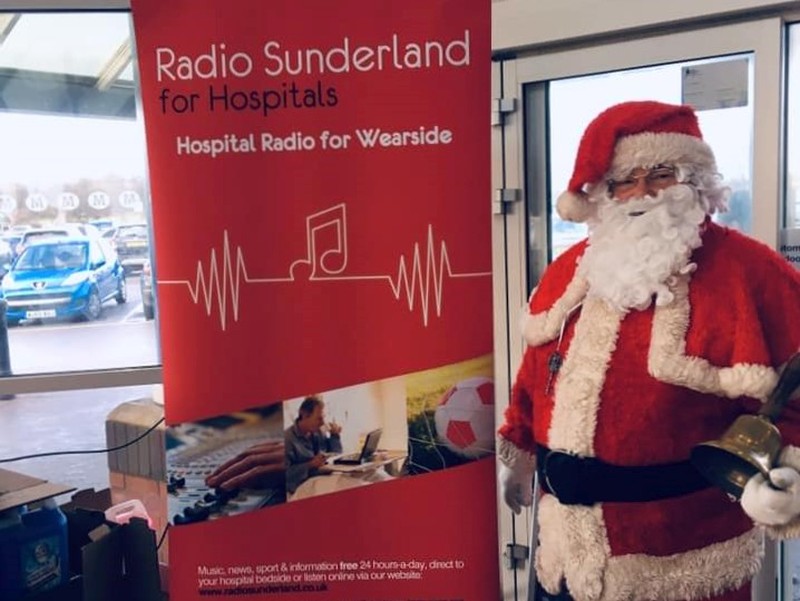 Santa dropped in to meet the kids at Morrisons Seaburn, while we played some merry Christmas music for the adults and held out our collecting buckets.
As usual everyone was full of seasonal cheer as they stocked up for the holidays, but managed to save some change to drop into our buckets.
On behalf the patients in The Royal Hospital, we would like to give our grateful thanks to the store management and staff for making all this possible and the magnificent generosity of the customers who contributed to the huge total of £831. 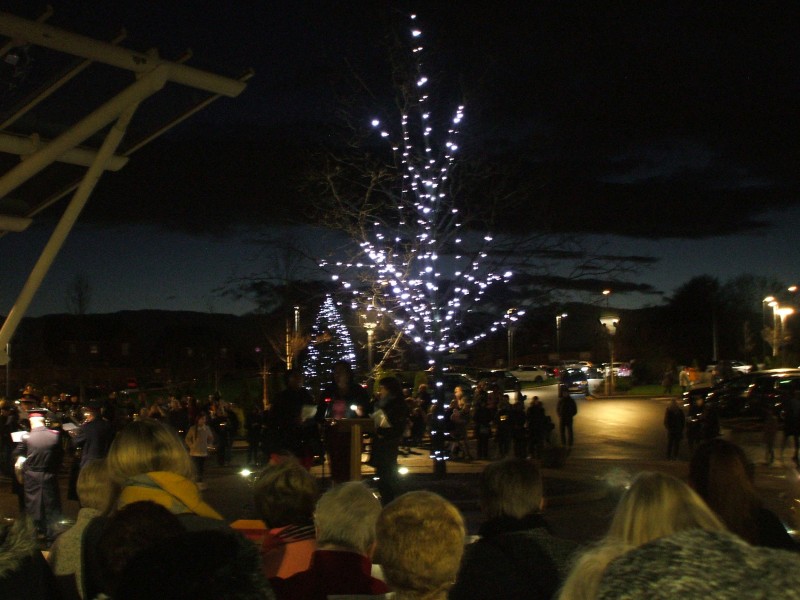 The Christmas Season is now officially under way.
For years we have been providing the public address system for the St. Benedict's “Light Up A Life" commemoration service at the beginning of December.
Taking part in this annual Carol Service has become somewhat of a tradition, a tradition that we are proud to be a part of.
Once again this year hundreds of people braved the cold and turned out to remember loved ones and support the work of St Benedict's Hospice. 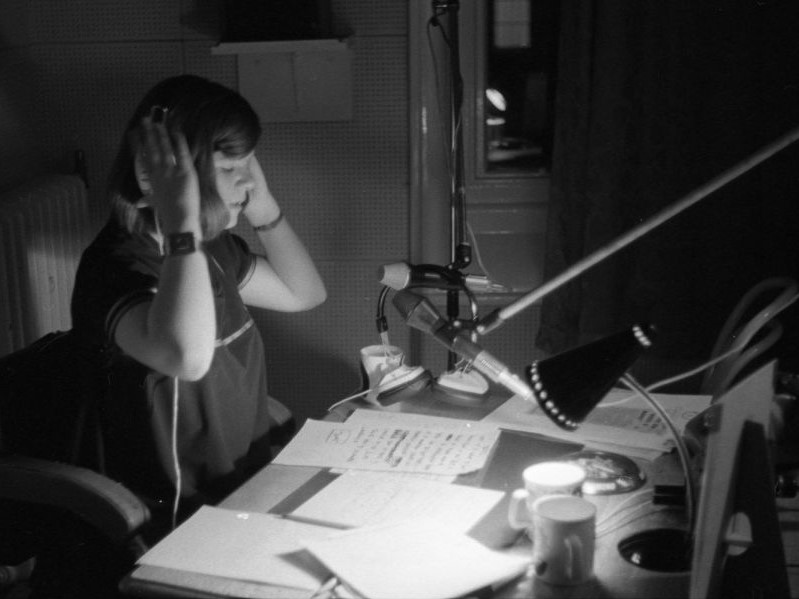 At Radio Sunderland for Hospitals we broadcast 24 hours a day, every day, to the patients of Sunderland’s Royal Hospital and online via our website.
However, it was not always this way.
The station was formed as the Commentators Association in 1953. The inaugural meeting was held in 1953 following a plea in the Sunderland Echo for volunteers, and broadcasting commenced during 1953/54 football season.
The aim then was to relay live football commentaries from Roker Park direct to the wards of Sunderland's Hospitals. 65 years on and we still broadcast commentaries of Sunderland AFC’s home games.

We’ve come along way since the 50's now broadcasting using technology that was only science fiction back then!
Our studios have undergone many upgrades since the early days, moving from the Sunderland District General Hospital, as it was in the 60’s, to the Havelock Hospital during the 70's, and then back to the General (Sunderland Royal) Hospital.
We moved to our present home at the Monkwearmouth Hospital 30 years ago, after converting what were former nurse bedrooms in to a studio complex.
We are currently looking to improve our archive; we have surprisingly very little in the way of recordings of programmes, documents, photographs or newspaper cuttings spanning the past 65 years.
In fact we don't have any photo's of the studio at the General Hospital.
If you or you know someone who has ever been involved in any way with hospital radio in Sunderland, we would love for you to get in touch especially, if you have anything you can share with us, including memories. Contact Us

Another bucket collection!
No not collecting buckets, but using them to collect spare cash from the generous customers at Morrisons in Seaburn.
A mention too for the management and staff, for their usual helpful and friendly welcome, and thanks for allowing us to fill the foyer with our music.
Our funds are now richer by £231.80
On behalf of our listeners in the Sunderland Royal Hospital, thank you all. 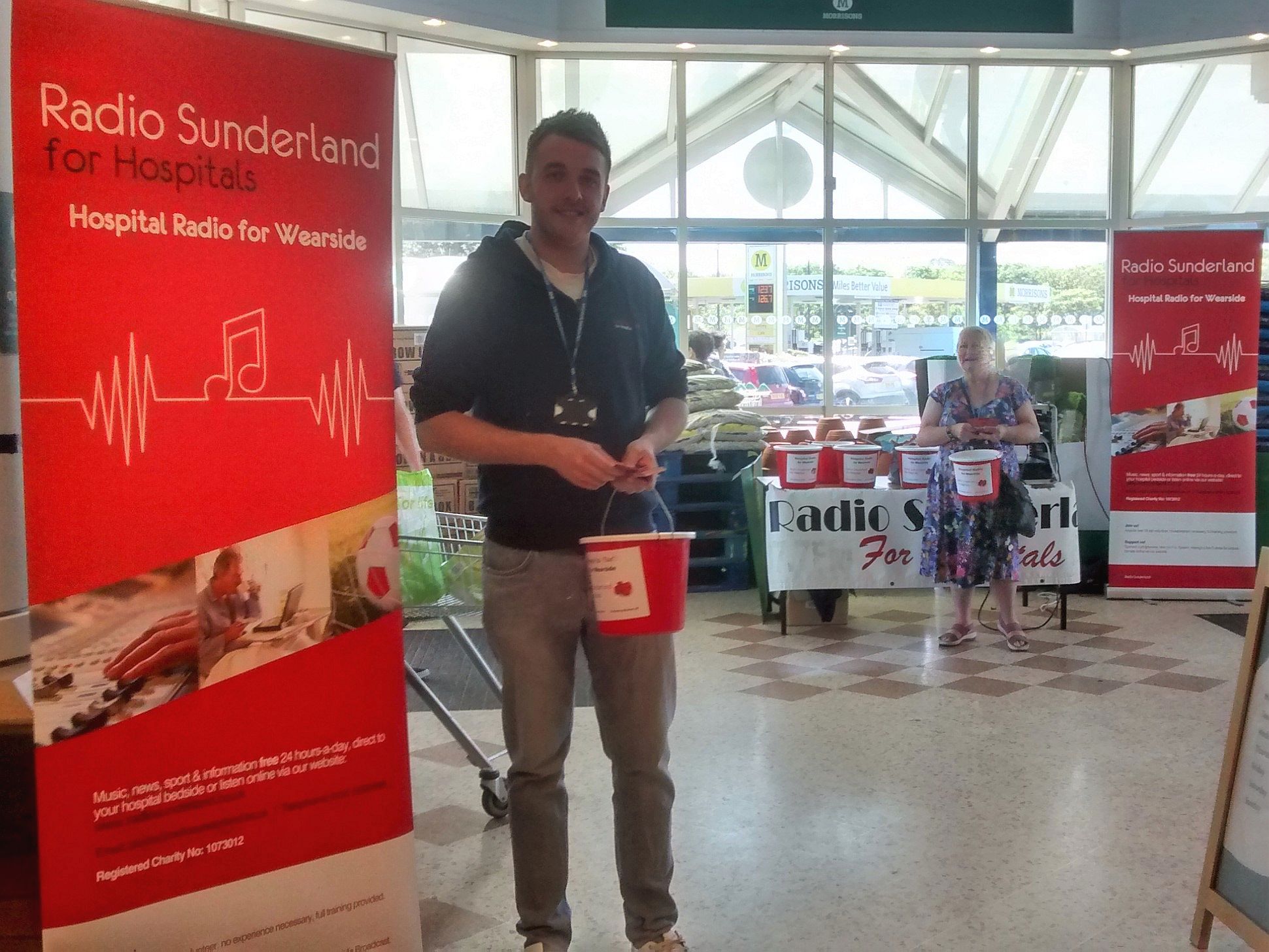 Some of our volunteers at Morrisons. We had our music "juke box" on hand to entertain customers as they entered and left the store.
We also had our collection buckets at hand in to which many people generously donated their small change.
So, it's a big thank you for your continued support and to the management and staff for their help and for once again allowing us to do some fund raising in their store.
The final total raised was a lovely £355
On behalf of the patients in the Sunderland Royal Hospital, thank you so much.

We would like to say a big-big thank you to Joann Charlton, seen here manning a cake stall, who is a Staff Nurse at The Sunderland Royal Hospital, for a wonderful surprise donation that is very much appreciated.
Thank you also to those who supported Joann with her fundraising.
She worked very hard to raise money for a project that regrettably, because of technical issues, has had to be abandoned.
So instead she has kindly decided to donated all the money raised to 'Radio Sunderland for Hospitals'.
As an entirely voluntary organisation, we rely on the support and generosity of local people like Joann, whose donation of £737 is very much appreciated.
Thank you Joann. 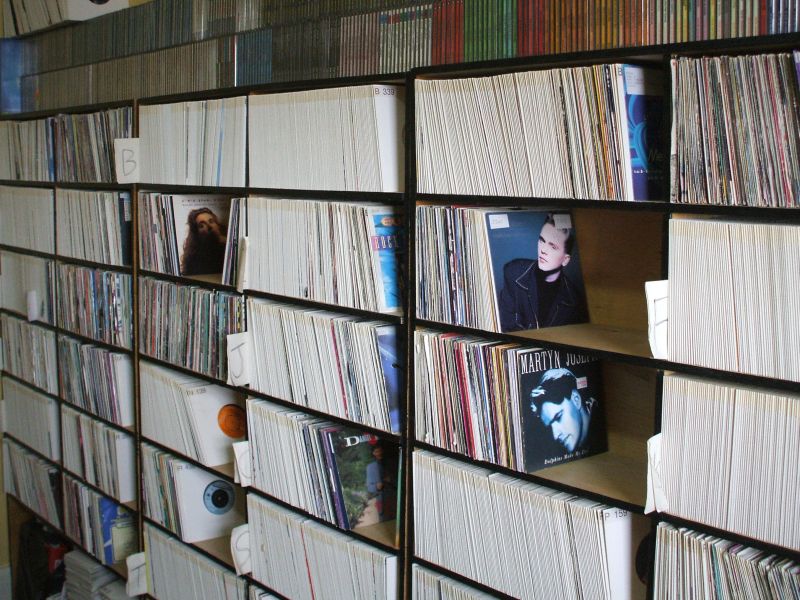 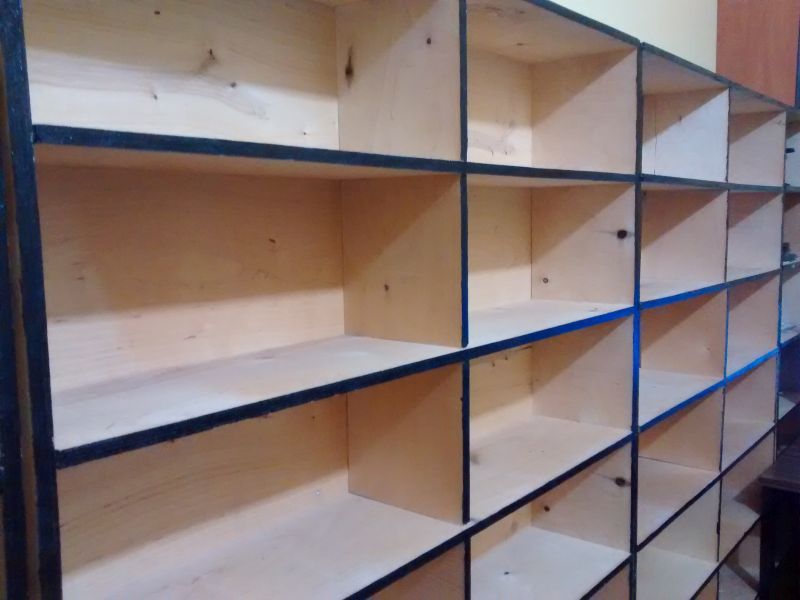 Since it’s inception in 1953 Radio Sunderland for Hospitals (The Commentators Association as it was known back then) played music from records.
Very easily broken shellac 78’s in the early days, moving on to vinyl 7 inch 45’s and 12 inch LP’s.
The collection of 78’s and the equipment to play them on were retired during the mid 1970’s.
With the arrival of the compact disc (CD) the use of vinyl gradually reduced until the arrival of computer based digital music became the norm and the final record turntables were removed from the studios during the last decade and confined to use only in the record library.
Now in 2018 the library record player is surplus to requirements as our collection of over 7,000 45’s has been sold off.
Photos:
1. Havelock Hospital studio, circa 1974, with one of a pair of a professional turntables donated by Tyne Tees Television.
2. Monkwearmouth studio record library, August 1988 until February 2018.
3. Record Library, March 2018 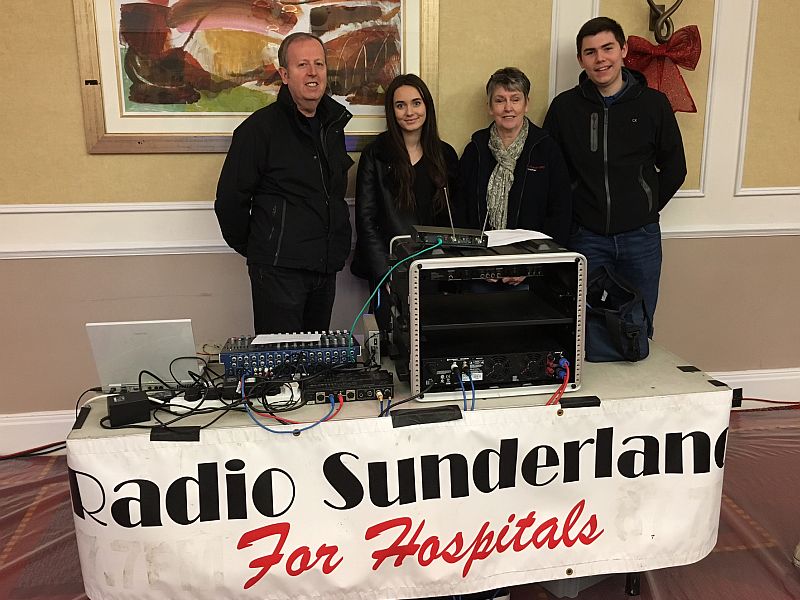 43 years and still hundreds turn out for the annual Boxing Day dip at Seaburn.
Our team turned up to man the PA again this year.
This year’s dippers started off from the cosy shelter of the Marriott Hotel before braving the North Sea all in the aid of charity, congratulation to every one of you.
Well done Sunderland Lions Club for once again organising this now traditional event.

A very special early Christmas present.
We filled the entrance foyer at Morrisons with festive music and in return the generous customers not only danced to the music, but also tipped their spare change in to our collecting buckets.
We would like to personally thank each and every person who contributed and also the management and staff who always make us feel so welcome.
From all of us at Radio Sunderland for Hospitals and on behalf of the patients in the Sunderland Royal Hospital, we send everyone very sincere Season’s Greetings.
A massive £825 was raised, thank you. 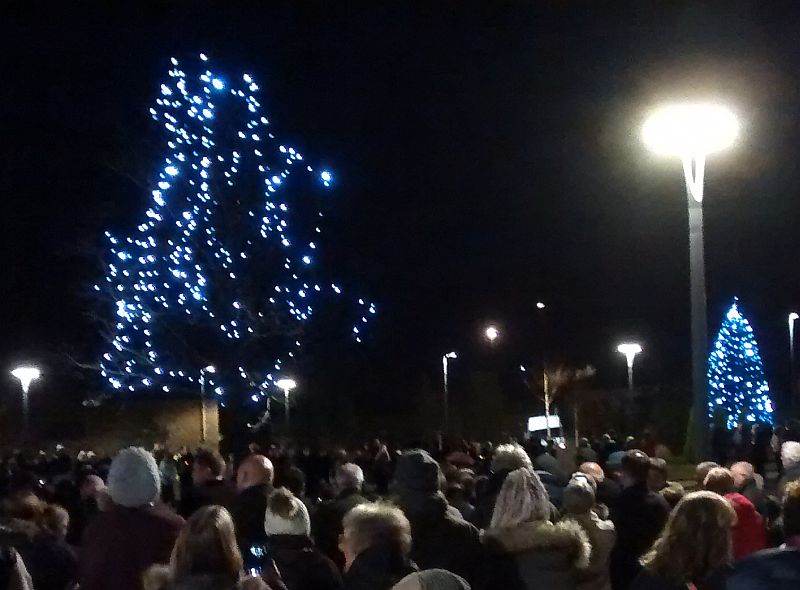 Following the snow during the week, the weather was kind and the fine evening brought out a huge crowd in the hospice grounds, to celebrate the St Benedict’s Hospice Light up a Life Carol Service at Ryhope.
We were there as usual this year to provide the public address system. 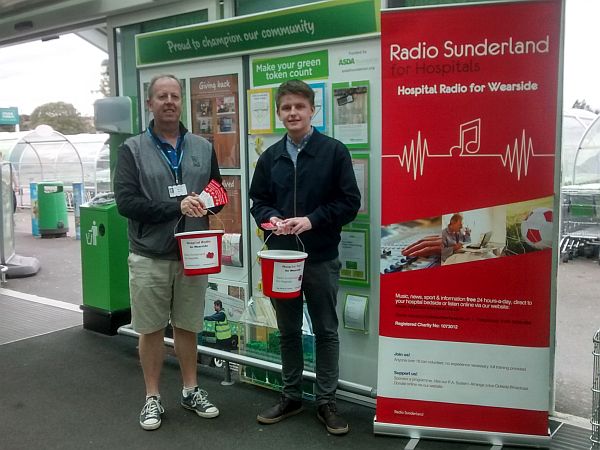 Bank Holiday Weekend and the sun came out in Grangetown!
Besides playing some great music our members were on hand to explain the work we do and how to become a Radio Sunderland volunteer.
We also managed to collect a welcome £344 boost to our funds that are essential in providing a free service to patients in the Royal Hospital.
A big thank you to all the ASDA management, staff and generous customers!

A fundraising store collection with our display and music.
Thank you for your interest in what we do and the kind comments we recieved.
We have to say a massive thank you for being so generous, we raised £377.
Many thanks also to the management and staff for making us feel so welcome and for asking us back later in the year!

Congratulation to everyone involved in the Sunderland GoDadRun 5K and 10K event that was held at the Silksworth Sports Centre on Sunday morning.
Radio Sunderland’s Michael Bartlam was on hand, here with three-time world champion athlete Colin Jackson CBE.

Colin was joined by fellow athlete Jamie Baulch, local footballing legend Kevin Ball and the Mayor of Sunderland Alan Emerson and a host of Y-front wearing runners getting ready for the off.

Lending a hand at the Seaburn Boxing Day Dip 2016.
We took along our PA system to help keep everyone informed about what was going on.
Congratulations to all the dippers who braved the elements to splash about in the rather chilly North Sea raising some lovely cash for some well deserving good causes.

A special mention has to go to the Sunderland Lions Club for all the time and effort they gave to organising this hugely successful event.
Till next year…... ! 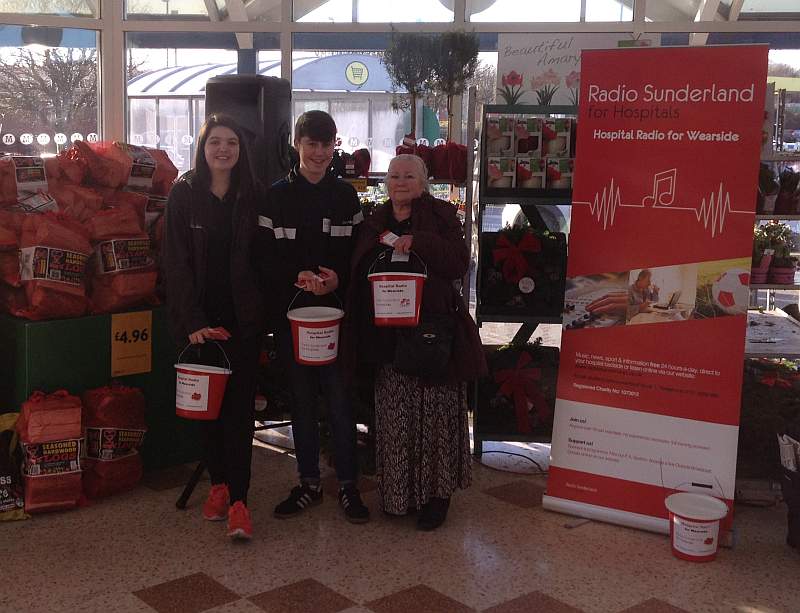 Christmas Arrived Early.
Our merry troupe of volunteers mingled with the customers at Seaburn Morrisons a week before Christmas.
Happy shoppers listened to our music and jingled their change and popped it to our waiting collection buckets that grew heavier by the minute.
A big thank you to the management and staff for making us welcome once more.
To each and every customer who took the time and trouble to contribute we would like to say a huge thank you, we are humbled by your magnificent generosity.
A total of £630 was raised. Wow! 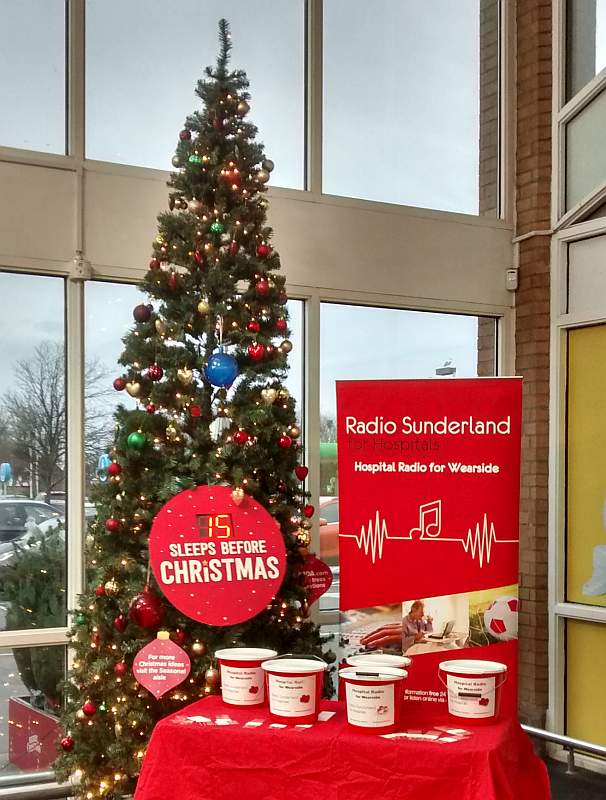 Counting down to Christmas at ASDA Sunderland!
A big thank you to everyone, both staff and customers, for the warm seasonal welcome to the Grangetown store.
We are truly grateful for everyone’s generous contribution to our bucket-collection.
We left the store with the same number of buckets as we arrived with thanks to staff member Tracy finding a stray.
It was all hands to the deck for the count back at the studio.
The final total - £361 thank you so much.

December is the time for Radio Sunderland’s annual visit to St. Benedict’s Hospice in Ryhope, to provide the PA system for the Light up a Life remembrance and carol service.
It was lovely to see so many people there. 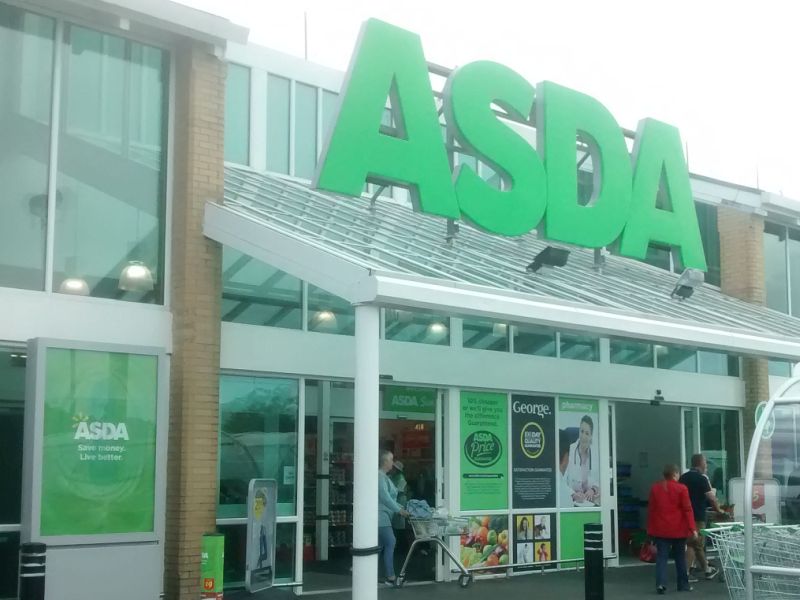 Thank you to the Management and Staff for inviting us back to their store.
Our music and display caused quite a bit on interest and our collection buckets were filled with spare change.
A big thank you to everyone for your generosity.
An impressive £343 was raised!

We are a bunch of enthusiastic, unpaid volunteers, and running a free hospital service is expensive!.
So we have made it very easy for people to donate on line via the PayPal Giving Fund.
This means that even those without a PayPal account can donate safely and securely using their credit card or bank account.

An unusually fine summer's day in Seaburn!
We were in the foyer playing some great tunes, thank you to everyone who dropped by to say hello and for dropping your loose change in to our collection buckets.
Thanks to your generosity £184 was raised.

Our old website severed us well when the PC was king.
However, following the mobile revolution over the past couple of years, now 60% (and growing) of the visitor to our website use a smartphone or tablet.
So to give you a much better browsing experience, we gave the pages a lick of paint and a whole new look that will happily work on your PC, laptop, phone or tablet.

Spring in the air and it’s the start of another year of fundraising, which is so essential to keeping us on the air providing our free service to the patients in the Sunderland Royal Hospital.
We visited old friends at ASDA with our information display, collecting buckets and played some toe tapping music in the foyer.
It was nice to meet you all and a big thank you goes to those that dropped their loose change in to buckets.
A thank you also goes to the staff with a special mention for Tracy for being so accommodating.
A very useful £257 was raised. Nice one!

You can help support Radio Sunderland by clicking the links below.
See "Support" for details.

© 2021, Radio Sunderland for Hospitals. All rights reserved. Registered Charity No.1073012